Being on holiday in our own small country, we visited this restaurant together with the kids, as they are always in for some pizza. Entering La Scala, you could immediately notice it was very busy, and therefore the waitress didn’t mention us. La Scala looks like a typical un-Italian pizza and pasta place, but as the restaurant is brand new, the interior was modern en nice.

If we have to describe the service, we can be very short: lousy! Our waitress did not speak Dutch, and as we were in the Flemish speaking part of the country, in a touristic place, we can at least aspect some descent Dutch. If she would have been friendly, it could have been forgiven, but that was not the case. It seems lately client friendliness is something extra on the menu. No bonus points so far.
We ordered as an aperitif Aperol Spritz, but unfortunately they didn’t know this… Instead received a white martini in a longdrink, without a slice of lemon, ice or anything. If all the above happens in 5 minutes, you won’t be able to make us happy, that’s for sure. The aperitif was served with some black olives, nothing more or less, not the best we have eaten. The so desired bread was missing on the table as well. 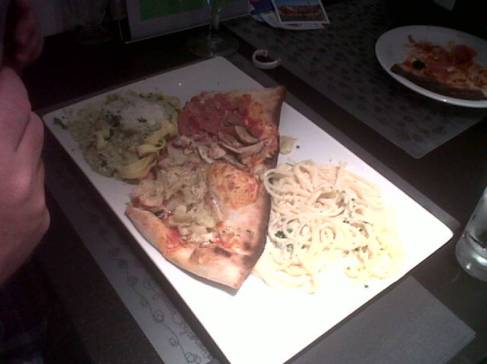 On the menu we found a large choice of different pizza, and also the kids menu was really extensive, which is an absolute plus point of you go out to dinner with kids a lot! The kids were very happy with their pizza Hawaï, which was actually very good! I had a duo of pizza & pasta (€ 16,50) with some tagliatelle pesto, a slice of pizza, and spaghetti with a cream sauce. It is definitely by far the most tasteless pasta I ever had. Luckily there was a slice of pizza, and I got some of the leftovers from the kids. My wife chose the tagliatelle boscaïola (€ 16), and although it was a good try, it was drowning in the olive oil. It was so greasy she couldn’t finish it…
You will not hear me say this restaurant has no potential. Considering the fact that they just opened, we will be mind in our judgement, but it will take a lot more to take this place to a higher level! Hopefully next time, when we have take out pizza, we can see some improvements! 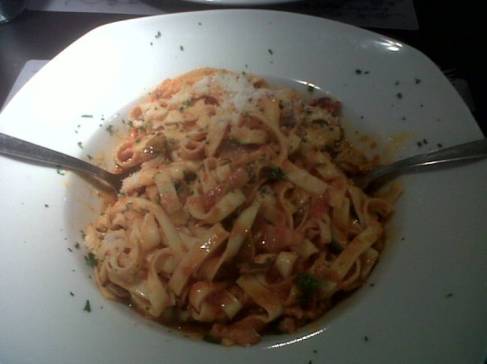