First night out in Tallinn, Estonia. Walking around the old city, seeing so many good restaurants, all small with interesting menu’s, following my gut feeling and choosing Kaevukohvik restaurant.: http://www.kaevukohvik.ee/

The restaurant looked warm and friendly and the first thing I saw outside on the menu was Moose, so I wanted to go and taste that. Immediately I was greeted by an overactive bouncing ball, American style ADHD approach of the waiter, always better then some passive teenager not looking at you…

He gave me a window seat with a view and asked to take my coat, what my name was, where I’m from, what I want to drink and if it was cold outside at the same time (-8 degrees, so yes very cold). But still it was honest attention and that is rare these days.

He gave me the menu, which I already studied outside, and that makes it easy to order. Even though I had 1 tough decision, look your self, what would you have done? 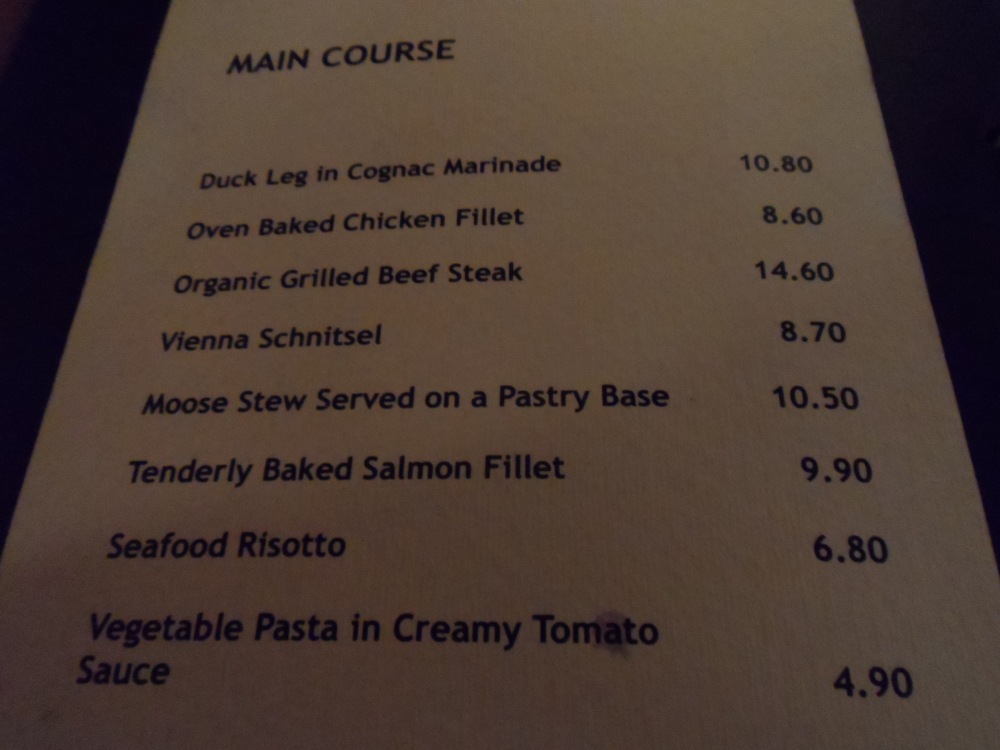 And by that I mean the duck leg with cognac sauce….

I was still on my diet, only not as strict as I was a few weeks ago (meaning that I tell myself to eat careful and less and meanwhile live the same life as I did before….). But this made me decide to go with salmon to start and then the moose stew to finish, and just 1 glass of wine in stead of 2…

The salmon tartar was a bit disappointing, not bad, only it was chopped too much. A good tartar must be cut clean in perfect cubicles and not be blended. Also the honey and mustard taste was to faint to be noticed. When you put all ingredients, meaning the salad, tapenade, vinaigrette and salmon on the toast, it was a good snack. With the right attention it could have been perfect.

The bouncing ball came back at the table during my last bite, asking how it was and at the same time asking about the book that I’m reading, what it is about and so on…. getting annoying by now….

I asked him to wait 10 or 15 minutes for the main course and that was okay. I asked him about the best red wine in his opinion to go with the coming moose and he suggested the: Corvina Garda Val Dei Molini, Cantina di Custoza from Veneto, Italy 2009.

And he was right, or guessed right, because it tasted as it sounds…. Very strong nose, black berries, wood and leather taste and just a killer wine! I promised to drink just 1….and lost because the first glass was almost done when the moose came.

The moose was like a beef Wellington. only with stew in stead of beef and the special stew sauce in stead of gravy. Simply said, it was served in puff pastry. The moose stew was pitch black, big glaze and smelling strangely nice… Typical game smell and an unknown taste. It had a sweet part as well as enough acidity and even some bitter tones. Strange to have all these flavors in one bite. Especially a bite with the pastry made it very pleasant, I can advise you to try and to eat moose! On the side there were some cucumber slices (WHY?) without any taste, some loose berries in different colors which were nice with this dish but strange to present like this… and some wedged potatoes. To dry for me so asked for some extra sauce or mayo (forgot the diet). They made up some heavenly homemade white sauce with yogurt, mint, lemon and mayo and that was almost the best thing of the evening…

I passed on dessert and the nosy waiter. Funny thing is, without telling him, is that he asked what score I gave the dinner 🙂 So I had to laugh and explained him that I have this blog and actually score restaurants and dishes… He was insulted when I told him it would be a 7,5….I explained and he understood.

Price was good with €22,- including the wine, restaurant was good with just some mistakes and overall a 7.5 is not so bad to give or to get. 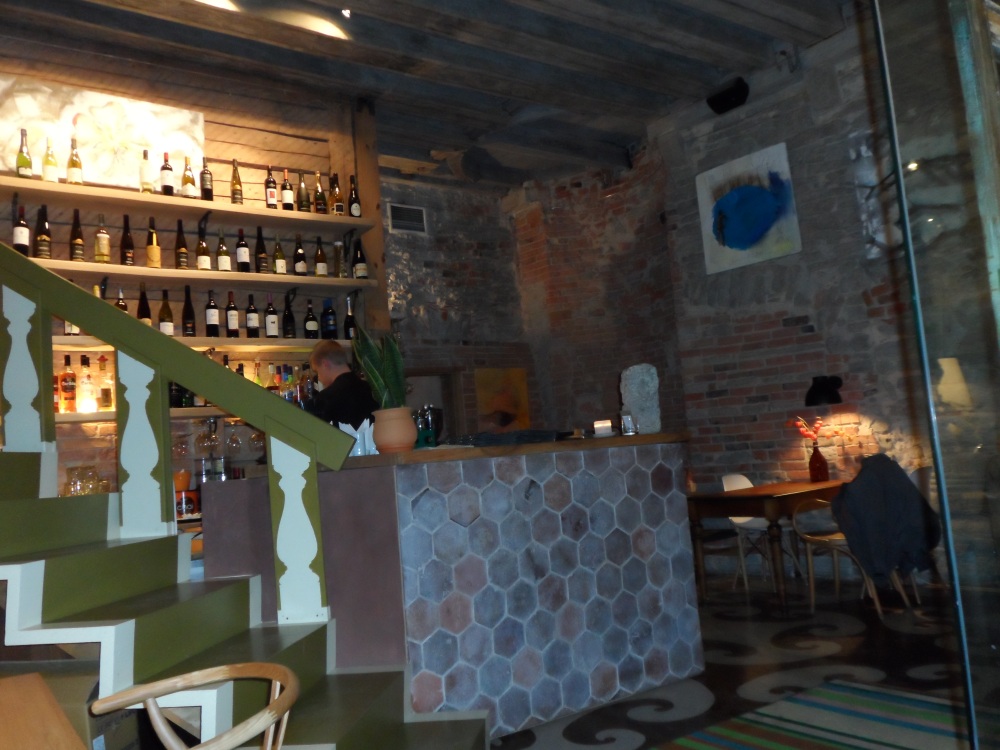