Look at the name your self, they called it Kremlin Red wall restaurant

On this Friday night I was treated to a real Russian dinner by my customers in Moscow.

They took me to a restaurant, not far from the Kremlin (2 miles max) called “the red wall” It is well known because it is the only place in Moscow to have an actual part of the red wall from the Kremlin inside the building. It looked good from the outside and at the same time very touristy… And that is exactly what is proved to be when I saw the hurdle of elderly Germans coming from the restaurant, it smelled of sweat and old people farts….

But since we had a reservation, we agreed on taking place in a very cozy private booth in the back of the restaurant. Almost as some kind of middle-east smoking booth. So we were more then happy taking a seat. But then the worst thing possible happen…. After taking our order for eating, they tell us there is no alcohol available in the restaurant…. They did not get the license for liquor and the beer and wine they still had in stock was all finished by the previous hurdle of Germans…!!! Damn, what now, try a dinner with no alcohol? Why not, maybe it can be a happy experience.

My customers made a decision for the both of us, and that worked out just fine. We started with typical Russian mezze/tapas/antipasti and it was so nice. Containing things as herring, pickled vegetables (real traditional), hand folded stuffed pasta like ravioli, boiled cows tong (very good surprising enough), some basic salad and bread. Wow welcome Moscow!

Then came the soup, kind of potato soup with parcel and garlic, strange, HEAVY but so good, I was done for the night already… When the stew came to the table. Lamb stew with onions and more potatoes but once more I was blown away, never expected this honest food at such a tourist trap… and best thing, they found 2 bottles of beer as well to co side by side with the lamb, so it was all good now!

After being blown away and stuffed as a thanksgiving turkey, the traditional dessert came; Blini’s (pancakes) with caviar, talking about strange combinations! Sweet and sea salt tasting caviar, it took me 3 to get used to…;-) and that was that, great people, awesome food and a good time. 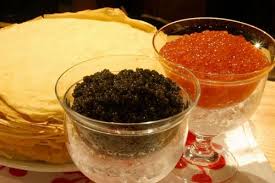